“The actuality of it is that while I was at Fiat Centro Stile I designed the Alfa 145 as a 4 door hatchback, and when it was sent to Arese (Alfa Design) Walter [Da Silva] and his team made it into a 2-door (with my help…For some time I went back and forth between the Alfa and Fiat studios to oversee the production-izing changes) and widened the front fenders and changed the grille (that without my help! I still have the original grill that was given to me by the modeling house that did the car as a going away present when I left Fiat). The 3-volume 146 was then done later by the Alfa team.”

“The original concept was part of a platform sharing project between Alfa and Lancia for the successors to the Alfa 33 and the Lancia Delta. You might be interested to know that the 145 started life on my sketchpad as a new Lancia Delta (I imagined it as a 2 1/2 volume instead of the 2 volume original), and when we brought the full sized plaster model back from the wind tunnel it still had all the foam on the rear that we had added to optimize the Cx (basically we filled in the “notch” in the rear and turned it into a 2 volume) Arch Mario Maioli, who was the “Design Guru” at Fiat at the time, saw it come in to the studio down one of the corridors and asked my boss, Arch. Ermanno Cressoni, “What the hell is that?” Cressoni replied, “Its the model that Bangle just had in the wind tunnel.” Maioli studied it at a distance and then said “Looks like an Alfa.” Cressoni replied “Of course Architetto, that’s exactly what it is.” The next thing I knew we were taking the Lancia grill mock-ups off and adding Alfa ones!! That is the twisted way that cars get borne! (on another note, the weird dip in the front door beltline of the 145 was a legacy from the chief engineer of Fiat at the time who had dreamed of putting such a strange line in the Fiat 500 when it turned out to be too expensive for that “cheap” car he made me add it to the Alfa 145!)” 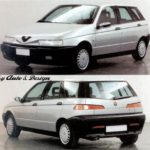 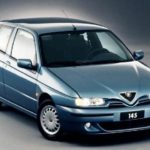 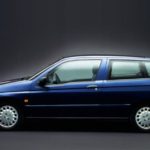 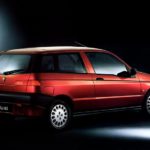 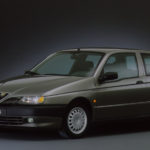 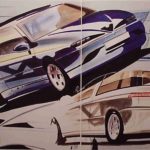